An Evening with Vauhini Vara and Andrew Altschul 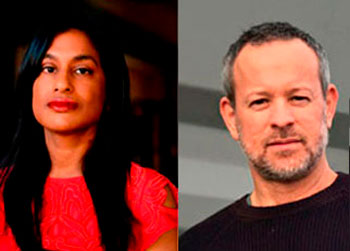 Vauhini Vara’s debut novel,The Immortal King Rao, is a New York Times Editors’ Choice, described by Justin Taylor in the Times as a “monumental achievement.” It has been named a best book of the year by NPR and others. Her short fiction has been published in Tin House, Zyzzyva, and elsewhere, and has won an O. Henry Award. She has also written journalism for The New Yorker, The New York Times Magazine, The Atlantic, and other publications.

Andrew Altschul is the author of three novels, including most recently The Gringa. His stories and essays have appeared in Esquire, McSweeney’s, The Wall Street Journal, Ploughshares, and anthologies including Best New American Voices and O. Henry Prize Stories. A former Wallace Stegner Fellow and Jones Lecturer at Stanford, he currently teaches at Colorado State University.

The event includes an interview, question and answers, books signing and some refreshments!

This is a “Write Salon” Event, and tickets will be available from : www.thewritesalon.com