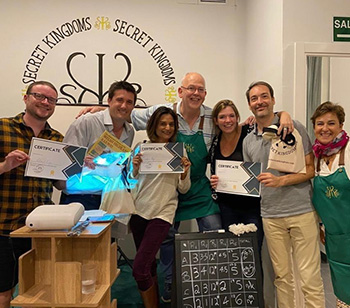 The 12th of October was not just Spanish National Day! Secret Kingdoms English Bookstore in Madrid celebrated October 12th with a Literary quiz and wine tasting. Six teams fought it out over 5 rounds covering everything from El Cid to Douglas Adams, and enjoyed a selection of fine wines. After the last round a tie-breaker was needed to separate the top two teams! Here we see the winning team celebrating their victory with us. It pays to know who wrote “The Very Hungry Caterpillar”!

If you want to find out or learn more about our upcoming events in Madrid, do visit our events page online or call in person, in person at c/ Moratin 7 in Madrid. If you want to try your luck at the quiz, keep reading!

Round One – Spain (5 Points available)

A) Juan Ruiz the Archpriest of Hita,

Q2 – The song of El Cid is one of the first great poems of Spanish Literature, but when did the events described take place?

A) Second half of the 9th Century

B) Second half of the 10th Century

C) Second half of the 11th Century

D) Second half of the 12th Century

Q3 – What message of hope did Madrileña novelist Almudena Grandes leave us this week:

a) Everything will get better

b) Its never too late

c) Love is all you need

d) Everything is for the best

Q1 – Which of the following is NOT the title of a work by Mary Shelley?

B) The Last Man

And for a bonus point – how did Mary Shelley´s husband, the poet Percy Bysshe Shelley die?

Q2 – In Emily Bronte´s novel Wuthering Heights, who relates the bulk of the story?

And for a bonus point – under what pen name was the novel originally published?

Q3 – After the success of “The Three Musketeers” Alexandre Dumas went on to write a sequel, but what was it called?

A) The Return of Milady

B) The Black Tulip

D) The Man in the Iron Mask

And for a bonus point – Alexandre Dumas had a son – also called Alexandre, who wrote a novel “Camille” which inspired which opera by Giuseppe Verdi?

Who else has won it twice?

And for a bonus point – can you name the winning novels of this 2 time winner?

Q2 – This was the first novel of a Scottish Author in 1993 and was longlisted for that years Booker prize. It it believed to have failed to make the shortlist after “offending the sensibilities of two judges”… Is it?

F) How late it was how late

And for a bonus point – can you name the author?

Q3 – “Last night I dreamt I went to Manderley again” is the opening line of which novel.

A) My Cousin Rachel

C) The House on The Strand

And for a bonus point – Can you name the author?

C) A Hitchhikers Guide to the Galaxy

And for a bonus point – can you name the author? (or the Android?)

Q2 – Stephen King´s “Western Fantasy” is his “Dark Tower” series across 8 Novels. But what is the first book called?:

Q3 – Phillipa Gregory is one of our most prolific historical novelists. But which age does she being to life in her main series of 15 Novels?

a) The Wars of the Roses and Tudors

And for a bonus point – where was she born?

Q1 – The Hogwarts express takes Harry Potter and his pals to school each year. But what station does it depart from?

And for a bonus point – what station does it arrive at?

Q2 – In the Philip Pullman Novels “His Dark Materials” what are his “dark materials”?

d) The books in the Oxford Libraries

e) The dark side of our souls

And for a bonus point – what is the name of the heroine?

Q3 – The Classic novels “Anne of Green Gables” and their successors are set where?

And for a bonus point – what is the surname of the heroine when she arrives as an orphan?

R1 – Q1=C, Q2=C, and “title characters exploits carried out whilst dead” (El Cid’s Body was strapped to the back of his horse for a final charge, whilst Bernie was propped up by two teenagers), Q3=A, and “The Ages of Lulu”

R4 – Q1=C and Douglas Adams/Marvin, Q2=B and “Roland” the link is to Lord Byron’s poem “Childe Roland to the Dark Tower came”, Q3=A and Nairobi/Kenya

How did you get on? Our winning teams scored 28.5 points each (using a joker to double their best score) and had to be separated by the following tie-breakers:

Q1 – In “Swallows and Amazons” what is the youngest walker child called?

A2 – “When Hitler Stole Pink Rabbit”